The above quote is perhaps one of the most challenging teachings of the Talmud, one that has been for generations a great conversation starter in philosophy, psychology, and the catchy ‘meaning of life discussions.’ Personally, this made a lot of sense throughout my childhood, as I was struggling with identity in all of its forms. Of course, if as a little girl everyone is treating you like a little boy, you wonder why you were born. As I got older, and closer to realizing that if I want to succeed in life I have to forge my own identity, the second part ‘let them examine their future action’ seemed about right.
Today, on my 25th birthday according to the Jewish calendar, I want to share an article about my own birth, inspired by my upcoming speech at “Beingwith.” It is part of a paper I am currently writing for a class at Columbia, and a really rough draft of a chapter in my upcoming book.
A Child Is Born: 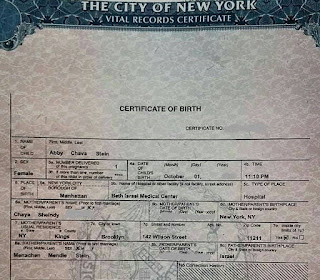