An LGBTisch In the Heart of Orthodoxy: A Reflection On the Past, A Wish For the Future

It was a (a)typical Friday Night in Washington Heights; the hub of traditional, establishment, Modern Orthodoxy, and home to its flagship institution - Yeshiva University. In what would look like a standard YU/Stern (YU’s college for women) inspired Friday night Tisch (a gathering to sing and socialize in celebration of the Jewish Shabbat), we were a group of over 150 young Jews socializing over great Chulent (a Traditional Shabbat dish) and songs. Everyone in the room was having a great time, nothing news worthy about that. Nevertheless, something else made that event so overwhelmingly special that I decided, I don’t care if I have time or not, I have to write it down. It was (possibly the first of its kind, at least in that magnitude), what we called, an LGBTisch (and allies). Almost everyone in the room was from an Orthodox Jewish background, and at the same time queer identified - or at least openly supportive of their Queer friends. Furthermore, most of the people in the room (excluding myself…) currently identify as Queer-Orthodox Jews (hyphenated intentionally). 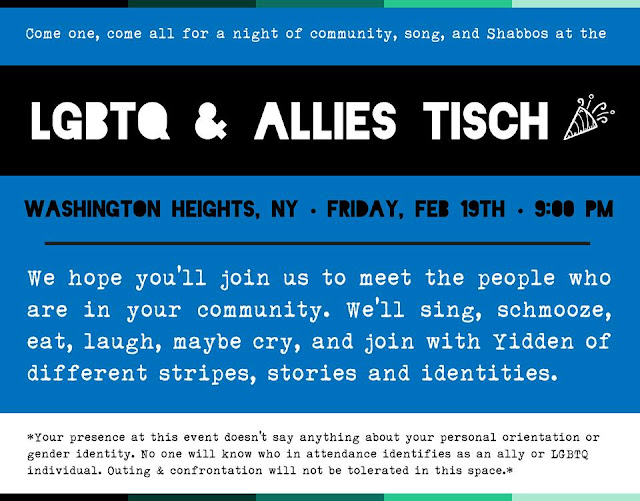 
[1]  No worries, the chances of me becoming orthodox again are lower than the chances of becoming a Buddhist or Sufi… sorry Orthodox friends, had to say it.
[2] Yiddish for Better.
[3] Find the full text in the first comment on this post. Feel free to post corrections and edits, as well as to copy it and use it as you please.
[4] I can not skip on that without mentioning the lifesaving organization “Footsteps” which helps these who are leaving Ultra-Orthodox communities. In addition to being a place that encourages every member to live their own life to the fullest, it is one of the most LGBT friendly spaces I am part of. Find us at http://footstepsorg.org/.
Posted by Abby Stein at 2:55 AM 9 comments:

This is what I wrote on Facebook as a reply to Columbia Queer Alliance's post supporting "Apartheid Divest" (I am intentionally NOT putting a link) - which is pretty much the Columbia chapter of the international BDS movement.

I am not sure what to say.
As an openly queer Columbia student, I now feel excluded, and in some ways, marginalized within my own marginalized community.
I agree, and I am outspoken about the Human Rights problems in the (entire) Middle East. I joined J Street U at Columbia with one main goal: fight the occupation of the Palestinians in a productive way. My pro-Palestinian stance has put me in odds with many of my Jewish friends, and even more so, with the few family members who still talk to me. Yet I do not support BDS for to many reasons.
·        BDS clearly undermines Israel’s rights to exist, which is somewhat ironic as we are all supposed to fight for the right of self-determination. I have had Jewish family and ancestors in Israel/Palestine going back to the 16th century (at least). BDS is telling me that I have no right to my heritage. Let us not even talk about the fact that a group that is constantly quoting UN resolutions (rightfully) ignores other resolutions from the same body all the time.
·        BDS has proven to jeopardize peaceful negotiations towards a two state solution on both sides. Well, some members of the movement, including the co-founder openly said that they do not want Two States.
·        BDS has thus far affected the Palestinian economy more than it did the Israeli economy. As a Jew who strongly identifies as Pro-Palestinian, I find this challenging.
·        BDS ignores domestic politics. This movement is strengthening the Israeli Right in unprecedented ways. The fact that Israel now has a right wing government that is not interested in a peaceful solution is in large ways thanks to the international BDS movement. That hurts so many of my fellow liberal Jews.
I want to see an end the occupation. I want to see an end to the human rights violations against Palestinians. I want to see an end to the suffering of every human being, Jews, Arab and Druze alike 'from the River to the Sea', and BDS is not helping.
I wish that next time I visit the State of Israel; I should be able to visit the beautiful cities of Ramallah, Jericho, and Nablus as part of the sovereign State of Palestine.
I feel that BDS is standing in the way of achieving these goals.


So CQA, please take notice that BDS, even the majority of its members really mean well, is not the best way, if an effective way at all, to fight for Human Rights, something that we, Queer people, have been fighting to achieve for years.
Posted by Abby Stein at 5:10 PM 3 comments: