I Have Daddy and Mommy Issues: Yet I Am Finally Proud With It. A Trans Woman Coming To Terms With Rejection

[1] And even when I tried telling him when I came to him that daddy you were right, something was going on, and this is what it is, he refused to accept it.
[2] Who also had ten kids, and by now have hundreds of grandkids and great-grandkids.
[3] He did add an ‘explanation’ that he looks on it as if I am sick, and if his kid gets cancer he is not going to reject them. It bothered me the way he looked on it, and for the next four years we had a ‘don’t ask, don’t tell relationship, but we had a relationship.
[4] For reference how much Hasidic Judaism means to my father: He is the tenth generation of the founder of the Hasidic movement, Rabbi Israel Ben Eliezer - the Ball Shem Tov, in five different ways, and he always preached that to us, non-stop.
Posted by Abby Stein at 7:01 PM 21 comments:

Reflections on a Jewish-Orthodox LGBT+ Retreat: There Is Hope! (Eshel National Retreat 2016) 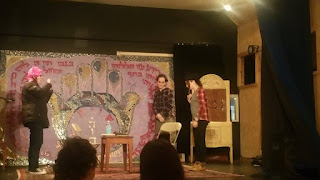 Watch the wishes of Retreat participants:
Oh, ignore my Yiddish 5 seconds in it...
Posted by Abby Stein at 8:14 PM 3 comments: